Nintendo has finally put out a list of classic games you can download onto your Wii. When your Wii gets connected to the internet, you can download these so-called Virtual Console games from Nintendo’s online store to the Wii’s internal memory. 1UP added short descriptions to the NES, SNES, N64, Genesis & TurboGrafx-16 games. You’ll be able to download all these games by the end of December, 2006!

SNES Games cost 800 Wii Points = $8/â‚¬8
* F-Zero: A futuristic racer that reinvented the genre.
* SimCity: Make your city awesome and you’ll get a statue of Mario!
Where the heck is Super Mario World? Strange it was at E3… 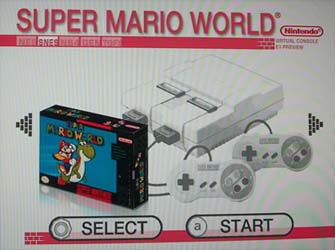