. . . . . . Halo 3: Legendary Edition.
The Halo 3 Collector’s Edition for Xbox 360 will be called “Legendary Edition” and is a replica of Master Chief’s helmet complete with four DVD discs.
– The first disc will be the Halo 3 game disc.
– The second will contain documentaries and developer comments.
– The third disc is all about the spin-off material that has been created (Red vs. Blue, This Spartan Life etc).
– The fourth disc will contain all of the cut scenes from Halo 1 to 3 in HD. (you can see it on the 3rd photo)
– A taste of the Halo movie will be on one of the discs. 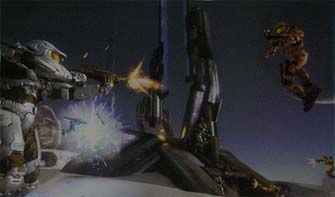 Here are the first Halo 3 Xbox 360 details from a Swedish games magazine. You can click the thumbnails throughout the page to have bigger versions pop up. Enjoy!

New Weapons.
The spike weapon and secondary weapon will always be showing on the back.
– Spiker: The weapon of choice for brutes

– Spartan Laser: An anti-vehicle weapon
– Nail Grenade: Sticks on walls and emits nails into the air (like in Resistance)

New Vehicle.
– Moongoose: The ATV that was supposed to be in Halo 2. It carries 2 people and it doesn’t have any weapons so it’s mainly a means of getting from point A to point B as fast as possible, but players can fire while in it.

New multiplayer features.
– Man Cannon: Launches you into the air. You can still be fired at and you can fire back. It sounds like the jump pads from Unreal and Quake Arena. Though the cannon part could mean that you are a weapon if you collide with someone physically.
– No bots: No bots again.
– Controls: The X-button will have a special use which game developer Bungie will not reveal. A guess is it’s for stealing the opponent’s weapon in close range. Bumpers are now used to reload both weapons independently.

Here are the magazine’s big quotes.

On plot twists.
“Halo 3 will contain more plot twists than any other game in the series” -Jaime Griesemer

On Gears of War being competition.
“We’ve played lots and lots of multiplayer and some singleplayer, and yeah, it’s really good. But it’s also quite a bit different from what we’re doing. I realize that a lot of people are concerned that Halo 3 and Gears of War are going to compete for the same audience, but I think that when people get to play, they’ll realize how different the games are. Gears is a much slower game where stragegy and cover plays a bigger part.” -Jaime Griesemer

On graphics.
“A lot is still missing in this build. Weather- and water effects are missing, and most of our HDR isn’t in there yet. We’re still at alpha stage, but when everything is in place, Halo 3 will be the best X360 has to offer.” -Brian Jarrard

“We definitely have another strategy than Epic Games when it comes to graphics. We’ll never engulf our game environments in lots of details like that. Gears of War looks absolutely fantastic, but we want to avoid compromising Halo’s unique visual style. That’s why we’re making a clean, sharp game as opposed to one with insane amount of details.” -Brian Jarrard

“There are many ways to convey emotion. Graphics is not the most important one.” -Brian Jarrard

On multiplayer and bots.
“Multiplayer has always been important, but it’s developed in a different way which makes it look bigger for every game. We have a base that we always build the MP part on, whereas the SP mode practically has to be built ground-up every time. Xbox Live also made MP in Halo 2 even more important.” -Brian Jarrard

“A lot of people ask us about bots. They think that the AI in Halo was pretty damn good, and would work well in MP as well, but it’s really not that simple. The enemies in Halo are optimized for encountering the player in large numbers. They would be a lot worse at abstract thought AI like ‘I have to defend my flag’ and so forth. In short, to create bots for Halo would be an immense undertaking, and we rather put that time into making new levels, weapons and netcode.” -Jaime Griesemer

Scans and translations thanks to Neogaf.

Update: Made a correction to the Halo 3: Legendary Edition spin-off material disc, the second Halo show was badly translated and is supposed to be “This Spartan Life“. Thanks to series staff Thomas for pointing it out. I noticed their official website was down, probably slashdotted in the wake of their inclusion in Halo 3, so here at Machinima are their funny movies rehosted, check them out, they might break out in a dance! 🙂