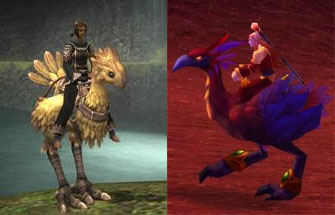 World of Warcraft: Burning Crusade beta testers keep making new discoveries in the upcoming WoW expansion. It turns out the new Blood Elf Mounts look a suspicious lot like the Chocobos from the Final Fantasy series. Outside of Blizzard maybe getting sued by Square-Enix because both overgrown chickens share similarities, oh sorry you’re a fan, I meant to say both noble animal look alike. Well, outside of that tidbit, which do you think looks better?