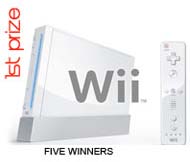 Without a doubt, the Nintendo Wii is the most wanted item on everyone’s wish list this holiday! Game developer Hudson says that’s why it’s giving away not one, but FIVE Nintendo Wii systems to their fans. If you haven’t entered yet, do it now and win, You have to be 14 or older and living in North America.

All you have to do is fill out the short form on the official Hudson website and you’re in. Sweepstakes ends December 30th, 2006.