Oct. 11 update: I was wondering why there was no download on Xbox Live. It turned out Sega just put this on the official PSU site: “We apologize, but the BETA release dates have changed. The release date will no longer be October 11th, but should see release very soon after. Thank you for your patience, we look forward to seeing everyone online very soon!”

Phantasy Star Universe fans on the Xbox 360 can download the demo version of the full game on October 11 & 12 to join the free, open beta, until October 18. You will need Xbox Live Gold to do it though. The game gets released in the US on October 24. I’m assuming this free demo isn’t valid for Europeans who won’t get the online RPG until November 24.

Sega will be charging a $10 a month to play Phantasy Star Universe online, even if you’re an Xbox 360 owner who’s already paying for Xbox Live Gold. The monthly subscription fee applies to all versions of the game, but PS2 & PC owners can buy a discounted six-month license for $49.95. This all seems a little unfair to Xbox 360 owners, so 1UP couldn’t share any more info on that until Sega responds on the issue. Via Kotaku. Read below about the storyline and single/multiplayer details in Phantasy Star Universe. 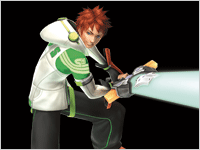 The story unfolds in a faraway place… the Gurhal System. The three planets that make up the Gurhal System are populated by humans and three other races born of the humans–Newmans, Beasts and CASTs.

Wars between the races raged for 500 years, but the races eventually settled into a moderately peaceful coexistence. But now, after a century of peace, certain devastation arrives…

Seventeen-year-old Ethan Waber and his sister Lumia were attending the grand ceremony commemorating the centennial of the Gurhal System’s Tripartite Treaty when suddenly a mysterious alien species known as the SEED launched a surprise attack. The Alliance Military’s armada was completely unprepared for the sudden invasion and was all but destroyed as the ceremony’s attendees succumbed to panic. In the ensuing chaos, Lumia is left behind in the rubble.

In order to save his little sister, Ethan borrows some equipment from a Guardian named Leo, and for the first time in his life, he’s flung into a dangerous battle of life and death…

In online (network) mode, players are given the opportunity to travel with a squad of other adventurers, enter urban sprawls teeming with hundreds of players, and build their unique avatars into powerful warriors.

The events of Network Mode take place in the same place and era as Ethan’s adventure in Story Mode. In order to help bring peace to the Gurhal System, the interplanetary security force known as the GUARDIANS is looking for new recruits. That’s where you come in… along with the countless other players you’ll encounter on the network. There, you’ll find stories not told in Story Mode. You might even encounter a few familiar faces.

In Network Mode, the character you create becomes a member of the GUARDIANS, stationed in the Gurhal System. You’ll have your own room and your own Partner machinery, and you’ll be able to have adventures and interact with other players in the same world that Story Mode takes place in. Begin a story that’s all your own!