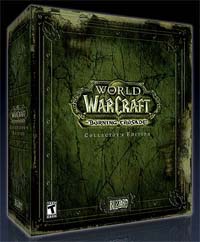 Blizzard announced that World of Warcraft: The Burning Crusade will ship in standard as well as Collector’s Edition packages. The Collector’s Edition will come in a special box that contains many exclusive extras to enhance your adventure into Outland, including:

The behind-the-scenes DVD will offer more than two hours worth of developer interviews and commentary on all aspects of the creation of The Burning Crusade, as well as trailers and cinematics from the game, and even footage of panel discussions from BlizzCon.

With the Collector’s Edition-exclusive in-game pet, the netherwhelp, you’ll be the envy of your guildmates and other players as you roam the expanses of Outland and Azeroth. We’ll post an image of the netherwhelp, offspring of the nether drake flying mount, in the near future.

A soundtrack CD with stirring music from the expansion pack, a beautiful coffee table book with exclusive concept art, and an Outland-themed mouse pad round out the wealth of bonus items available in the Collector’s Edition of World of Warcraft: The Burning Crusade. Further details on the contents, as well as pricing and availability info, will be announced at a later date via WoW.