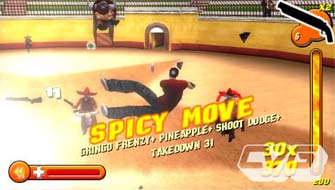 C&VG has more screenshots and mentions the PSP blaster, looks incredibly similar to Total Overdose, and has you playing as Ramiro Cruz, a man out to avenge his recently-deceased father over 19 missions across seven exotic locations.

This sounds a bit like my day today, when I had to get the damsel in distress some hot buns from the bakery in a car race where lives lied in the balance for the first three levels. The scene was not exotic though, I had to find the bonus umbrella.