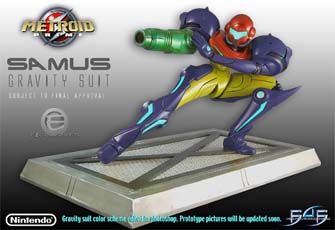 The above specifications are similar to this Samus Varia Suit action figure (recognizable orange). First 4 Figures has used the official game files from Retro Studios to create an extremely accurate recreation of the Gravity suit, with pose inspiration taken from official Metroid Prime artwork. The suit series will include, but not limited to, Samus Aranâ€™s Light Suit, Dark Suit and Phazon suit.