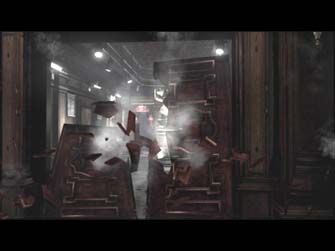 Resident Evil: Umbrella Chronicles for Wii is a game that ties up all loose ends throughout the series. Similar to Outbreak, it’s split up in different chapters; you will be able to play as the main Resident Evil (RE) protagonists from the main series (from RE Veronica to RE4, prologue to RE5], as well as unlock additional characters.

Gameplay will be in 3rd person similar to RE4, but additionally the game takes advantage of the controller’s core features. Puzzles and shooting will have a new twist to it.

Below is a list of all so far announced details & features:
* The game consists of 4 “chapters”, RE1’s mansion, RE2’s RPD, RE3’s city areas and RE4’s village (plus surrounding areas).
* Each chapter has 2 characters to choose from. RE1 has Jill and Chris, RE2 has Leon and Claire, RE3 has Jill and Carlos and RE4 has Leon and Ada.
* New content not in the games that the chapters were based on will be added. The primary goal of this will be to link RE4 and Umbrella’s status in it more closely with the rest of the series.
* There are several characters that can be unlocked by playing through the game: Rebecca Chambers, Hunk and Albert Wesker.
* The gameplay of all chapters is designed around RE4‘s. Press the B trigger on the Wii remote to go into over-the-shoulder view, aim with the pointer and press A to fire.
* The game will have QTEs, but rather than push buttons you have to make motions with the Wii remote in order to get through them.
* All characters will have melee attacks, just like RE4.
* To encourage replayablility, each character has strengths and weaknesses, similar to how in RE4:Mercenaries Ada had the least health, Krauser was the slowest, etc.
* Just like in RE4:Mercenaries each character has a unique set of weapons. What’s more players can only carry 2 weapons at any one time. Chris gets a pistol and shotgun whilst Jill gets a pistol and grenade launcher.
* You will be able to find several new weapons during each stage. For example, RE1 will have Richard’s shotgun, RE2 will have the Desert Eagle, RE4 will have the Chicago Typewriter. There will also be new weapons like Krauser’s anti-personnel robots.
* Similar to Devil May Cry 3, after each chapter you can save your data and any new weapons picked up will be available for use in Arcade Mode.
* Arcade Mode is like a giant Mercenaries minigame, where you pick a character and stage and blast through it. Building on the resounding success of Mercenaries seen when RE4 was released.
* Scenario mode will feature a large number of in-game cutscenes.
* Ammo conservation will play a part in the gameplay, so it’s not just constant action like RE4.
* The picture at the start (above) shows the player is able to destroy certain doors by blowing them up.

Update May 6th 2007:
* Besides the mansion, the police station from Resident Evil II, and the train from Resident Evil Zero have been confirmed as levels.
* Half of the game takes place in locations from other games, the other half puts you in enemy/company strongholds.
* Carlos Oliviera was confirmed as a playable character. Wesker is definitely in the game, but he was not confirmed/denied as a playable character.
* Rocket and Grenade Launcher will make a returns.
* Tilting the Nunchuck allows you to slightly move the camera to reveal hidden objects/power-ups.
* Resident Evil Zero, I, II, and III will all be represented. There may be levels from other games, but Code Veronica will be ignored.

We’ll have a sneak-peak at the game in our next update. A full trailer for the Wii RE game will be coming out during the Tokyo Game Show between September 22â€“24th next week. Via Capcom-Europe & REhorror & Gonintendo