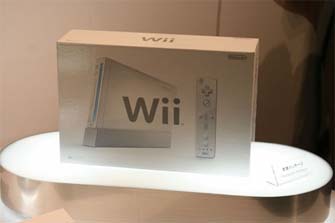 Nintendo released its list of Wii launch titles with their respective game publishers. The first newly announced game is Wii Play AKA “Your First Wii Games” which consists of 9 games including Duck Hunt for people new to using the Wii controller. The second new game is Tamagotchi for the Wii, no need to explain that one I think. Another new Wii game (not a launch title) is a Wii version of Big Brain Academy!