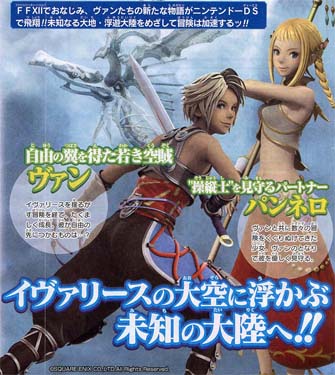 Square-Enix announced in the Japanese magazine Shonen Jump that they are working on Final Fantasy XII: Returning Wings for the Nintendo DS.

The above artwork shows two of the characters that will appear in the RPG. The game will be based mainly on the adventures of characters Vaan and Penelo. Final Fantasy XII: Returning Wings reportedly features a graphic style that will appeal more to a younger market. Scan by Jeuxfrance via QJ.