Producer Kyle Shubel (yes, he has a name) is not afraid to kid around about ancient Japanese battles with giant enemy crabs and massive damage when it comes to his PlayStation 3 launch title, Genji: Days Of The Blade. Game Informer interviewed him and found out heâ€™s serious about making improvements he hopes players will appreciate. Improvements other than real-time weapons change that is, as this video shows those are already perfect 😉Game Informer: Letâ€™s just get this out of the way right from the start. The infamous historical crab battles, the massive damage, all over the internet, message boards, YouTubeâ€¦ In fact, thatâ€™s what Genji 2 is probably most known for at this point. How is the team taking all of this?

Kyle Shubel: First of all, you kind of have to take it with a grain of salt. Weâ€™re paid to be kids. Weâ€™re making video games for a living. Câ€™mon, how bad can it be? That, coupled with â€œany press is good press.â€ Now letâ€™s move onto the next step. The fun part is, the heike crabs, the giant crabs, are actually real creatures. There are over two meter crabs that exist in Japan. Go online to Google and type in heike crab and youâ€™ll get hundreds of links to these things. They actually are a part of history in Japan where they talk about them being the imbued spirits of the dead Heike warriors in the Battle of Dan-no-ura during the Genpei War, which youâ€™re playing the Battle of Dan-no-ura in Genji: Days Of The Blade.

During Days Of The Blade weâ€™re going to do the Battle of Ichi-no-Tani, weâ€™re going to do the Battle of Dan-no-ura. In the Battle of Dan-no-ura hundreds of soldiers died and basically so many ships came into one harbor you could hop from one ship to another without getting your feet wet. So many soldiers died that they say these crabs are imbued with the spirits of the dead Heike warriors, thatâ€™s why they actually have faces on them. For us, for Westerners, yeah, giant crabs are a little bit out there. For the Japanese, itâ€™s an extreme version of reality. I would love for it to not be all over the internet. But honestly, I kind of like it. People are talking about the game.

[Editorâ€™s note: Weâ€™ll save you the research. The Heikegani (or heike crab) does inhabit the seas of Japan and has a face-like pattern on its back. However, the maximum size of a heike crab is only about 1.2 inches. Not so scary, huh? But Japan is also home to the biggest crab on Earth, the Giant Japanese Spider Crab, whose leg span can reach up to 12 feet and total weight can tip the scales at 40 lbs] 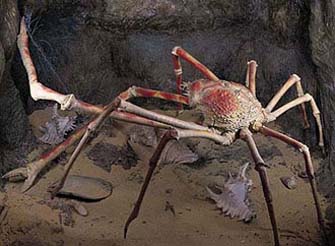 All jokes aside, if you’re interested in the game that is looking really good right now, check out the new pictures and read the rest of the interview over at Game Informer.