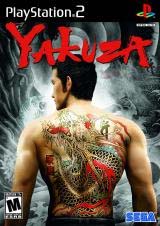 The latest issue of Famitsu gives the first details of Yakuza 2 (Ryu ga Gotoku 2) on PS2, which is set one year after the original and takes place in Kamurocho, Osaka and other places in Japan. Sega is bringing the same voice cast back (in the Japanese version anyway). And thus Kazuma Kiryu (and others) returns as the main character in the sequel. It’s not just a direct sequel…

The sequel begins with an assassination which prompts Kazuma to head south. A few new characters have been announced for the title. The game’s heroine is Kaoru Sayama, a police officer who’s known as the Yakuza Hunter. Her purpose in making contact with Kazuma is currently unknown. Kazuma will also meet up with an Osaka rival, Ryuji Koda, known as the Dragon of the Kansai area.

Speaking with Famitsu, Nagoshi commented on some of his goals with Yakuza 2. In addition to providing a deeper dramatic storyline over what was found in the original, the game also has some themes that weren’t in the original, including an adult love story. The story focuses on a battle between Tokyo and Osaka.

All areas from the original are being improved. The cabaret club, which allowed you to interact with girls in a limited way in the original, now lets you actually go out on dates with girls once you’ve gotten tired of sitting around in the club. You can also manage your own cabaret club now, customizing the interior to your liking.

The number of sub quests/stories, which you encounter by speaking to people across town, has increased to above 100! Included is a quest where you actually become a host and have to do your best to please the ladies and earn the most cash in your cabaret club.

The original also had a number of mini games. Famitsu has details on golf and bowling mini games, which have been added to the sequel. There also seems to be a “game” of some form where you sit in your home and watch videos.

One of the best features of the original was its battle system. Sega is keeping some elements of this system the same while improving others 200%. There aren’t any changes to the character growth system, through which you build up Kazuma by assigning experience points to three parameters. However, Sega is adding more “heat action” moves to the title. Heat action moves are pulled off by filling up a special attack gauge, and result in a cinematic attack.

You can also now team up with allies for combo attacks. In one sequence, a restaurant employee gives Kazuma a bowl of ramen to use against his opponents. A bit more down to earth, one sequence features Kazuma and a friend beating up on an opponent together.

Perhaps the biggest addition to the battle system is the ability to direct your attacks in whatever direction you like. In the original, battles became difficult when you were surrounded by enemies. The sequel lets you select the direction of your next attack, allowing you to finish off an attack in one direction, then begin pounding an opponent behind you.

The game sequel is set for release on December 7th, 2006, in Japan. Meanwhile the original game will see an American release in September 5th, and in Europe on September 15th, 2006. The reason Japan is getting part 2 now, is because the original has been out there for a year now.

Translation from Japanese by IGN