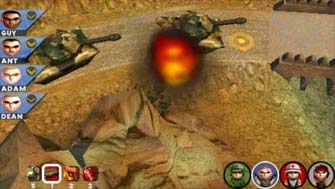 Codemasters is updating the gameplay of the beloved 16-bit 1993-1994 originals, Cannon Fodder combines fast-paced strategic action with the seriesâ€™ devilish sense of humour that earned it the tagline: war has never been so much fun… on PSP. The game is set for release on April 1st 2007.

For those who havenâ€™t been through Cannon Fodderâ€™s unique military training, players command their troop of soldiers, individually or as a group, in a diverse range of on-foot and vehicle based combat missions while generally blowing stuff up and causing untold amounts of military mayhem. 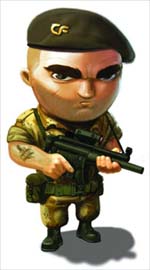 The game has a unique and distinctive visual style thatâ€™s unmistakably Cannon Fodder. Far from being just a pretty tribute, this new version builds on the classic tactical combat gameplay and introduces a raft of new features, such as the ability to call in air strikes, perform radar sweeps as well as unleashing a host of new weaponry including flamethrowers and sniper rifles.

As the conflict unfolds, the action is reported live from the warzone by the new FTV channel, giving you a better look at the gameâ€™s pintsized protagonists. The wireless capability of the host consoles gives rise to another exciting innovation: four-player link play in deathmatch as well as co-op scenarios.