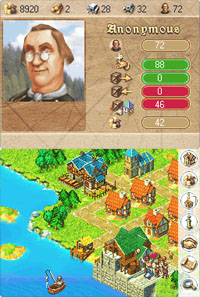 Sunflowers announced a Nintendo DS version of the RTS game Anno 1701. It will be released early 2007 in Europe. It was announced during the German Leipzig Games Conference, so since the PC games in the series also came out in the US it’s pretty certain the DS version of the upcoming PC game will too. This PC version of Anno 1701 is coming out in the US on October 26 and in Europe in November 2006. The storyline introduction trailer for the PC game should explain what the DS version is about as well. You can see more DS screens at Planetds. Watch the PC trailer here: