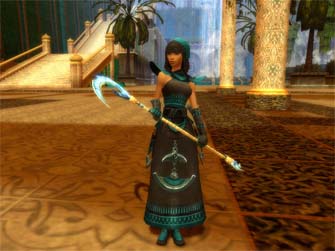 ArenaNet & NCsoft announced a new retail package which will soon give Guild Wars players their first look inside the upcoming release of Guild Wars Nightfall.

Guild Wars Nightfall takes place on the continent of Elona, Land of the Golden Sun. It is a nation comprised of three great provinces; The island province of Istan is the home of a vibrant people who live among the monuments of an ancient empire.

The military province of Kourna, under the command of its great leader, Warmarshal Varesh, hugs the shores of the mighty river Elon. And in the rugged lands to the north, the Princes of Vabbi rule from their opulent citadels. Elona is a land of wealth and power, protected by its champions, the Order of the Sunspears.

In Guild Wars Nightfall, Elona has fallen under the shadow of an evil, outcast god. Against the encroaching desolation of an infernal realm, the people of Elona will need more than a hero to save them, they will need a hero to lead them. . .for nightfall is at hand.

Guild Wars, an instant bestseller worldwide upon its release in April 2005, and Guild Wars Factions, the number one game in both North America and Europe earlier this year, are global online roleplaying games. Guild Wars Nightfall continues the tradition of inviting players to immerse themselves in an epic storyline centered in a vibrant fantasy setting, build personalized characters, and find adventure in missions and quests.