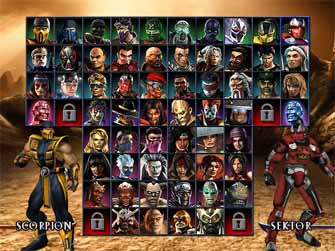 Now either those are almost all characters (click picture for bigger version) from past Mortal Kombat games, or they put in 60 Shang Tsung’s and left two Create-A-Fighter spots open. All jokes aside, it’s really great to see sub-zero, blindfold-man, cap-woman, 3-eyes and zombie-liu back 😉

This list confirms Chameleon from MK Trilogy is in, “He is Shao Kahn’s greatest warrior”. Mortal Kombat Armageddon is meant to tie up all the loose ends in the series’ past on Xbox & PS2. Basically next-gen they want to start all over with the series storyline.

The 7th game in the series brings together every character in Mortal Kombat history as well as adding new characters, all for one final Armageddon. Features are: Create-A-Fighter mode, Create-A-Fatality mode, and a brand new Konquest mode that uses the Shaolin Monks engine. Release Dates: US on October 9, Europe on October 27. Via Midway