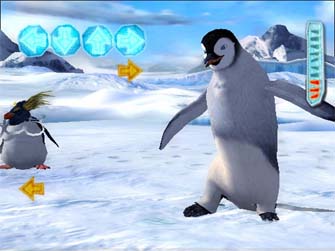 Happy Feet is an immersive adventure game filled with song and dance that puts the player in the â€œtap shoesâ€ of Mumble, a young penguin born into a nation of singing Emperor Penguins. Unfortunately, Mumble canâ€™t sing a note… but he can tap dance something fierce! Mumbleâ€™s inability to find his “Heart-Song” means that he can never truly belong, or more importantly, win the affection of his beloved Gloria (awww), one of the most sought-after penguins in the nation.

Game details, features list, and the movie’s trailer below.

Following the general storyline of the film, the player will be able to experience life from the point of view of Mumble; in exploration, music, dance and interaction with the friends and enemies of the penguinâ€™s world. The playful and lively music soundtrack complements the exciting rhythm matching game play and two-player dance-off competitions. The game is coming out on PC, PS2, GBA & DS. US release date is November 21, European release date is November 24.

Game features:
* Experience life as the accidentally charming Mumble! Your goal is to win the heart of Gloria and save the Emperor Nation. Step into Mumbleâ€™s happy feet starting with his tap dancing birth, his harrowing escape from a hungry leopard seal, his fiesta-filled friendship with the Adelie Amigos and finally to his climactic encounter with humankind.
* Tap Dance to distract enemies and woo Gloria! Face off against different opponents to unlock new areas and earn new dance moves.
* Playful and lively soundtrack of music in the memorable styles from the film including rock, disco and country allows for exciting rhythm matching game play. Dance encounters with memorable characters like Lovelace and Gloria while collecting songs to create a custom soundtrack.
* Belly-slide, kick, break, swim and dash through the enormity of Antarctica. With Mumbleâ€™s sleek and aerodynamic penguin form, navigate the sometimes perilous but beautiful tundra in water and on land.
* Multi-player Family Mode features two-player dance-off competitions, rhythm matching swimming challenges and belly-sledding action.
* Faithful to the film. Experience your favorite environments and characters from the film. NPCs include Memphis, Norma Jean, Lovelace, Adelie Amigos, Seymour, Noah the Elder, Albatross, Elephant Seal and Ramon. Also, discover the reason behind the shortage of fish!
* Complete 28 missions in 5 different locations to win the heart of Gloria. Explore, belly slide and dance through Emperorland, Adelieland, Land of the Elephant Seals, Forbidden Shore/Whaling Station and the Zoo.
* Character growth: Play as Mumble the adorable fluffy toddler, the molting teen, and the confident young adult with unique game play for each age.
* Pick up collectibles such as fish, snowflakes and trash to aid in your quest for a heart song. Collect songs for the jukebox, snowflakes to unlock characters, grace notes to correct your dance moves and turbo squid to boost your speed while belly sledding.