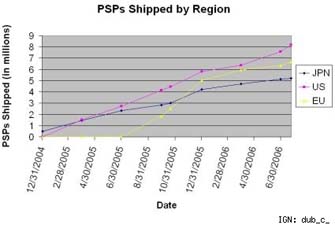 The above overview is made from official Sony data. This means that on July 24th 2006 Sony reached 20.02 million units shipped to stores. It’s not units sold, but it does mean the following regions got these allocations. Japan: 5.20 million, USA: 8.17 million, Europe: 6.65 million.

Total allocation for 2006 is still 15 million PSP‘s behind, so it’s clear they aren’t selling half as well (especially in Japan where the DS Lite is a hit) as Sony wanted them to. In comparison Nintendo’s DS sold +/- 22 million units. PSP just needs more hits like the upcoming GTA Vice City Stories.