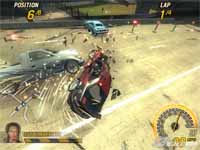 In a financial report publisher Empire announced Flatout: Total Carnage is going next-gen to the Xbox 360. No clue if it’s a third game in the series or an improved port from upcoming current-gen release. Full online support for up to 6 players is expected for Xbox Live as it’s in the FlatOut 2 Xbox, PC & PS2 versions as well (those are coming out June 30 in Europe and August 1 in the US).

FlatOut is an over-the-top racing game series where players experience the drive of their lives as they race around fully destructible environments in one of many fully customizable and upgradeable cars.

Tracks are filled with crash hotspots, thousands of dynamics objects, risky but rewarding alternative routes, all designed with battle racing in mind.

Featuring even more craze in the form of destruction derbies and ragdoll stunt events where you propel your rag-doll driver through the windscreen. A bit like Burnout’s Crash mode then… without the seatbelt on :p