There were rumblings before, but today Ubisoft confirmed that Assassin’s Creed is currently under development for Xbox 360 and PC. Assassin’s Creed was first shown for PlayStation 3 at E3 last May. It’s nice to know computer and Microsoft console owners get to play too. 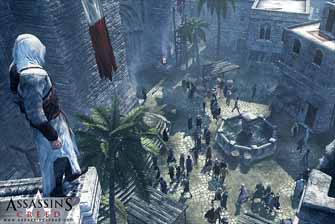 Furthermore, Ubisoft will soon announce if Assassin’s Creed will have a timed exclusivity (of say three or six months) on Sony’s PlayStation 3 or not, before coming to Xbox 360 and PC. The PS3 version of the game is scheduled for an early 2007 release. News via the IDEF Festival in Cannes, France.


The first game in the Assassin’s Creed series is set in 1191 AD, when the Third Crusade was tearing the Holy Land apart. Shrouded in secrecy and feared for their ruthlessness, the Assassins intend to stop the hostilities by suppressing both sides of the conflict. Players, assuming the role of the main character Altair, will have the power to throw their immediate environment into chaos and to shape events during this pivotal moment in history. Translated from Xboxgamer.