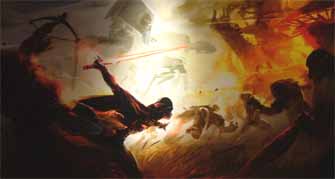 A Star Wars game with new technology known as DMM (Digital Molecular Matter) was shown behind closed doors at E3. In an exclusive first look at this new school of physics CVG sat through a tech demo that first saw a plank of wood with balls being chucked at it – it broke down the middle in the generic physics style. This, we were told, is how other games work. We were then presented with a plank of plywood that LucasArts technicians bombarded with beeping R2D2s. The wood splintered, it wobbled, it broke along its grain, it looked amazingly real.

We know little of the game itself, only that it’s Star Wars, it’s being released in 2007 and that you can play a character with darkside force powers. Clues, however, lie in the artwork secreted around the LucasArts booth – photos of which you can see here. The game certainly deals with Darth Vader, although perhaps not playing as him.

One piece of artwork sees a group of four mercenaries apparently under the command and tutelage of Vader himself. Another sees three clearly light-side characters dealing righteous death to Stormtroopers. Another again sees Vader battling Wookiees on Kashyyyk (shown above). Will you play the mercenaries, or will you play the good guys or both? That’s up for question, but it certainly takes place soon after Episode III. As shown by the presence of Felucia in the demo – the fungus planet briefly shown when the Jedis all get killed in Revenge of the Sith.