Home » News » Paris Hilton messes up her game at E3

Paris Hilton messes up her game at E3 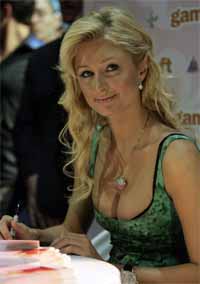 Paris Hilton unveiled her new video game on Thursday at E3, but inexplicably called it by the wrong name as she greeted throngs of fans and photographers. Wearing a green minidress and red platform pumps, Hilton made a brief appearance to promote “Paris Hilton’s Jewel Jam.”

“Sorry I’m late,” the heiress said. “I’m really excited to have my new video game, ‘Diamondquest.’ Thank you all for coming, and you can download the game in June” she said. Unfortunately for her the actual title of the game was right behind her!

After Hilton arrived, men in business suits jockeyed for space with reporters and computer geeks as she sat at a table posing for photographers while signing autographs. Her game, which can be played on a cell phone, will be available this summer.

Video game maker Gameloft will produce a series of video games with Hilton. Looks like Gameloft really got their money’s worth, cough cough 😛 Thanks to my buddy for sending this in.