Bethesda has Fallout 3 in development 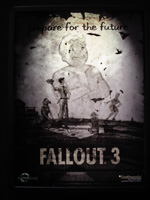 While walking by the Bethesda E3 booth Modernsavant spotted a poster from the long-awaited third-incarnation of the cult favorite role-playing game.

Fallout was a classic old school role-playing experience with new depth and complexity, whereas Fallout 2 is the sequel to the critically acclaimed game that took RPG’ing out of the dungeons and into a dynamic, apocalyotic retro-future.