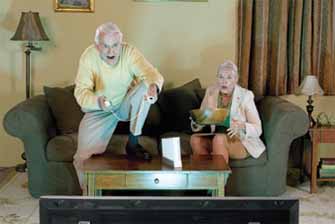 Super Mario Galaxy – The ultimate Nintendo hero is taking the ultimate step… out into space. Join Mario as he ushers in a new era of video games, defying gravity across all the planets in the galaxy. Mario takes advantage of all the unique aspects of the Wii Remote and Nunchuk controller, unleashing new moves as players shake the controller and even point at and drag items with the pointer. Players perform mind-bending, low-gravity jumps across wild alien terrain as they experience platforming for a new generation.

Metroid Prime 3: Corruption – If you think you knew what it felt like to be the bounty hunter behind the visor, think again. Take aim at evil with Nintendo’s revolutionary controller. Players control Samus by moving with the Nunchuk controller and aiming with the pointer, allowing for a level of immersion unlike anything they have ever experienced. Through the eyes of Samus, players experience a quantum leap in first-person control as they wield the Wii Remote, the ultimate device for the first-person shooter genre. Samus will employ well-known power-ups like the Grapple Beam and Morph Ball, as well as a bunch of new surprises, to help her survive her coming trials. Saving the planets from Corruption isn’t enough, though. Eventually, players must take down Samus’ mortal enemy, Dark Samus. 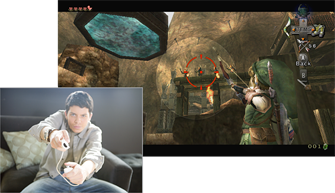 The Legend of Zelda: Twilight Princess – When an evil darkness enshrouds the land of Hyrule, a young farm boy named Link must awaken the hero – and the animal – within. When Link travels to the Twilight Realm, he transforms into a wolf and must scour the land with the help of a mysterious girl named Midna. Using the power and unique control of the Wii console, The Legend of Zelda: Twilight Princess incredibly precise aiming control using the Wii Remote. The Wii Remote and the Nunchuk controller are used for a variety of game activities, including fishing and special sword attacks. Players ride into battle against troops of foul creatures using an amazing horseback combat system, then take on massive bosses that must be seen to be believed.

Disaster: Day of Crisis – Survive nature’s most devastating catastrophes in Disaster: Day of Crisis, a panic-inducing survival game for Wii. When a wave of natural disasters pummels the United States, a rogue special forces unit takes advantage of the chaos and seizes a nuclear weapon. Players race a car down a mountain to escape a roaring pyroclastic flow, dodge toppling buildings during a devastating earthquake and swim for their lives in a raging flood. No matter what happens, fight to survive.

Excite Truck – In the grand racing tradition of Excitebike, get ready for a big-air experience like no other as players rocket their trucks across dynamically changing terrain. Remember tilting your arms while playing Excitebike to try to make your character land a huge jump? Well, that experience is finally a reality with Excite Truck, a wild, off-road race only possible on Nintendo’s Wii console. Tilt the Wii Remote right and left like a steering wheel to steer. Once the truck goes airborne, tilt the Wii Remote every which way to line up perfect landings for turbo boosts.

Project H.A.M.M.E.R. – Killer robots are attacking major cities across the United States, and the military is powerless to stop them. Players control one of Project H.A.M.M.E.R.’s cyborg prototypes: half-man, half-machine, with an extraordinary weapon – and the power to save the world. Equipped with a hammer of amazing strength, players represent the only hope against an unstoppable army of marauding automatons. Players use the Nunchuk controller in one hand to maneuver through a variety of vast and detailed environments and the Wii Remote in the other just like a real hammer to control the hero’s weapon. Lift it into the air and bring it down to smash robots to smithereens.