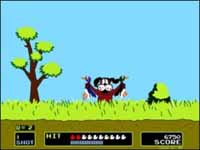 Let’s hope this time you get to shoot that annoying laughing dog as well! Because Nintendo is planning to show a Wii sequel to its Nintendo Entertainment System (NES) classic shooter series Duck Hunt at its E3 2006 booth today. The title will be playable. No other details about the project have yet been revealed.

Duck Hunt arms players with a virtual shotgun and lets them blast away at a series of flying ducks. Given the precision aiming needed in the classic title, which worked with a light gun. Updated: Nintendo will be showing a gun peripheral for the Nintendo Wii in conjunction with the “new generation” Duck Hunt sequel. Allegedly, the device will work along with the Wii (remote) controller to create the classic feel of the original NES classic.