E3’s showfloors just opened up to the press, here’s a tour of the controller add-ons, like the newly announced Light Gun Shell that should work wondering when playing Duck Hunt Wii. The footage ends with a newbie playing Super Mario Galaxy. I wonder what that music game is…

While experiencing Nintendo’s demonstration of the Wii’s upcoming Virtual Console classic games download service, AMN staffers speaking with Nintendo representatives commented on the apparent analog action the controller’s shoulder buttons had to offer. Including not only the analog feel but a digital click function, as well as a button layout similar to that found on the Gamecube, it appeared that Gamecube titles would be playable with the Classic-style controller.

When questioned about the speculated compatibility of the Wii Classic Controller with Gamecube titles, Nintendo representatives stated that planned support was, “in the works, we’re planning on compatibility eventually.”

I also found a picture of the sensor bar that you place near your TV to give the Wii’s controller it’s 3D feature. Sadly it’s not wireless, might not have been possible, but at least it has a long cord. 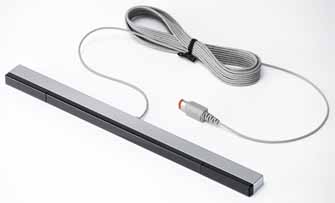