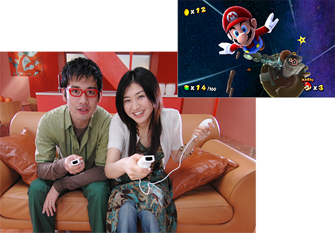 * NO loading times on the Nintendo Wii to prevent annoyance with both old & new gamers;
* Each controller part has its own motion sensor;
* Shigery Miyamoto had a wristbands on the controller, so it won’t accidentily be thrown away during gameplay;
* No confirmation on the $250 price, but release set for 4th quarter of 2006;
* I’m pretty sure I saw Pilotwings & Fire Emblem in the opening trailer;
* Metroid Prime 3: Corruption
* WarioWare: Smooth Moves
* Zelda Twilight Princess will come out in both GameCube & Wii (enhanced) versions at Wii launch;
* Super Mario Galaxy, aka Mario 128 is the new Wii Mario;
* Excite Truck, the controller is a steering wheel;
* Project H.A.M.M.E.R.;
* Disaster: Day of Crisis;
* Hyper Sonic aka Sonic Wild Fire;
* SD Gundam G Breaker from Namco-Bandai;
* Sengoku Action from Koei;
* Necro-Nesia from Spike;
* One Piece Unlimited Adventure from Namco-Bandai;
* Finalfurlong Revolution from Namco-Bandai;
* Final Fantasy Crystal Chronicles: The Crystal Bearers;
* Dragon Quest Swords: The Masked Queen and the Tower of Mirrors;
* Madden ’07 snap, pass, run;
* Dragon Ball Z: Budokai Tenkaichi 2 aka Dragonball Sparking 2;
* Tony Hawk’s Downhil Jam;
* Rayman 4: Raving Rabbids;
* Cars from THQ
* Elebits from Konami
* Super Swing Golf Pangya from Tecmo
* Spongebob Squarepants is even unique on Wii;
* Wii Sports (Tennis, Golf, Baseball, Music, Airplane in 1) as launch title
* Red Steel, even doorknobs can be opened with a twist of the controller or punch it open!
* 27 games on the E3 showfloor Wednesday & more on video, the Virtual Console downloadable games are not included in this number.

This list was updated straight from the Live feed.