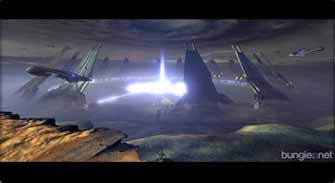 In a surprising move, albeit one that wasn’t TOO surprising, Microsoft has officially announced and released a trailer for Halo 3. Being the biggest franchise in Microsoft’s cannon, you knew it was coming, but no one expected the announcement and trailer to come so soon. Halo 3 for Xbox 360. (click to view trailer)

Halo 3, the third and final game in the Halo Trilogy, will be released in 2007. Interested in the storyline? Read

Halo 2 ended in a cliff-hanger, with the Master Chief, the hero of the Halo series, returning to Earth in the midst of a climactic battle between the Covenant, an alien coalition, and Earth’s defensive forces. Halo 3 is about Earth under Covenant rule:

“With its defensive forces, all but obliterated, Earth has fallen to the unstoppable might of the Covenant. These alien occupiers have discovered something beneath the ancient African sands–something incredible … something Forerunner.” The Forerunners are an extinct alien race that built the huge artificial ringworlds called Halos, and the Halo games have focused on the mystery surrounding these strange objects.