Nintendo has released details on their full handheld line-up for E3. For movies you can check out the Japanese Nintendo DS site (press movie icon to play movies). 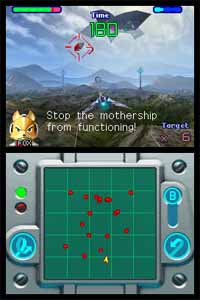 A new Pokemon is the sole Game Boy Advance title, while the Nintendo DS gets all the gaming love with tons of great new games. Many old and familiar characters and franchises are getting their DS due, while lots of surprising new titles are on the way as well. Quite a few surprises, including the first U.S. Custom Robo game, the old GBA RPG Magical Vacation looks to finally be on it’s way to the U.S., retooled for the DS. And all of Nintendo’s star franchises are making appearences, including Mario, Zelda, Donkey Kong, Kirby and Fox. For lots of info on all these new games, read below.

Chibi-Robo: Park Patrol is an adventure follow-up to the previous Chibi-Robo game. The story follows Chibi-Robo as he ventures into the great outdoors, where the flowers have been transformed by evil monsters. The character can use buggies, cars and boats across lawns and ponds. He is also equipped with a squirter to fend off enemies, and also dances to give life back to the park flowers. No release date has been given for the game as yet.

Clubhouse Games is a card, board and clubhouse game collection that includes checkers, darts and poker. The game can be played by up to eight people from one game card over wireless game sharing, and will feature a Pictochat-like interface for communicating with friends. The game will also feature bowling, backgammon, bridge and billiards, and forms part of Nintendo’s Touch Generations library which is intended for non-gamers.

Hotel Dusk: Room 215 is an intriguing new graphic adventure game, that places you in Los Angeles in 1979. As Kyle Hide, an ex-cop turned salesman, you must investigate the mysterious room of the title and solve the mystery of Room 215. Holding the DS console, like a book, the touch screen is used to grill characters, search for clues and solve puzzles.

Custom Robo Arena is an action role playing game set in a sci-fi landscape, where players fight toward the Custom Robo championship. You will be able to upgrade your Robo with unique parts and create a unique warrior that can be taken online over Nintendo Wi-Fi connection. There’s also multiplayer with Multi-Card play and DS Download Play. The DS touch screen is used to customise the robot as well as clean it up after battle.

Diddy Kong Racing DS was also announced by Nintendo today, although the company didn’t offer any more information prior to the show. We’ll have to see if the company chooses to show it at the show when it opens on Wednesday. The game is being developed by Rare, who also made the N64 original!

DK: King of Swing DS is an action game starring Donkey Kong. A sequel to the GBA game, King of Swing DS sees Donkey Kong swinging and climbing across levels that make full use of the console’s dual screens. Adventure mode will feature Diddy Kong as a sub-character and there will also be new moves, items and mini games available. There is also a four-player mode that will make use of multi-cart and DS download play and will offer the choice of Donkey Kong, Diddy Kong, Dixie Kong and Funky Kong.

DS Air is the working title for a new flight simulator from Nintendo. The aim will be to take elite strike fighters and hunt down a mad dictator, and will be a realistic sim with customisable fighters and weapons. Locations include land, sea and air, and DS Air will feature a co-op mode that can be played over Nintendo Wi-Fi. 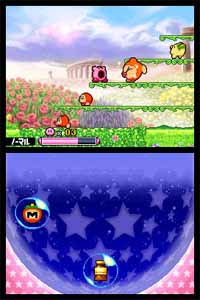 Kirby is a provisional title, but Nintendo has announced that it is a new action game in which Kirby’s copy abilities have been massively boosted. You can use the stylus to mix and match copy abilities, so that you can burn trees with fire ability or freeze water with the ice ability. The title also has sub-games that can be played locally by up to four players, both via multi-card and DS download play.

The Legend of Zelda: Phantom Hourglass sees gaming favourite Link tackle a new adventure due for release in Q4 2006. This time heâ€™s washed ashore on a mysterious island and must find the way back to his companions with the aid of a fairy. The game will be played almost entirely using the stylus, not just when controlling Link, but also when solving puzzles and making notes on the map. Thereâ€™s also a 2-player wireless mini-game available, involving a race against time to collect Force Gems.

Magical Vacation (working title) is a game that tasks players with the rescue of their teacher and classmates from the Will Oâ€™ Wisp magical academy. As players progress through the game they will fight monsters to earn experience points and buy new weapons, gaining levels and power as they go. As well as the solo game players can team up with up to five friends wirelessly to take on enemies in a special â€˜Amigoâ€™ dungeon. The game will be controlled almost exclusively with the stylus and features turn-based combat that accommodates melee and ranged attacks.

Mario Hoops 3-on-3 is due for release on September 11th and, as youâ€™d expect, sees Mario enter the world of basketball. Each team will contain 3 figures from the Mario universe, although itâ€™s only possible for 4 human players to play simultaneously, so expect some NPCs to make up the numbers.

Mario vs. Donkey Kong 2: March of the Minis is an action puzzle sequel to be released on September 25th that puts the player in control of Mario toys in a bid to save Pauline â€“ one of the franchiseâ€™s early characters not seen for decades. In addition to playing through the normal game solo, players can create their own maps and send them across the world via the Nintendo Wi-Fi Connection, as well as downloading those that others have created.

PokÃ©mon Mystery Dungeon: Blue Rescue Team, slated for a September 18th release, turns the player into a PokÃ©mon character for the first time. The land is being ravaged by numerous natural disasters, and you must team up with a partner PokÃ©mon to rescue others in trouble and save the day. Most of the game is set in dungeon environments and players will employ various strategies to progress. There is no multiplayer element to the game announced as yet, but is also available for the GameBoy Advance under the title PokÃ©mon Mystery Dungeon: Red Rescue Team.

Starfox DS is a 3D space-based shooter due for release on August 28th and has the player jumping aboard an Arwing fighter and blasting through a branching set of missions. Players can also dogfight with their friends, or play co-operatively â€“ either with 7 other players using the local wireless functionality, or with 3 others across the world on the global Wi-Fi Connection. In co-op mode thereâ€™s an added strategic element that will see the team commander drawing on the map the route the group should take through the level. 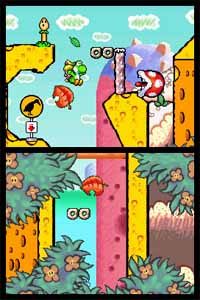 Yoshi’s Island 2 Return to the colorful wilds of Yoshiâ€™s Island in a new platforming adventure for Nintendo DS. A mysterious floating island has suddenly appeared over peaceful Yoshiâ€™s Island. Soon after its arrival, a gaggle of kids vanishes from the island school. Thankfully, Baby Mario, Baby Peach and Baby Donkey Kong manage to avoid being kidnapped. Now, Yoshi and the three young superstars must set out on a wild and colorful quest to rescue the kids and investigate the ominous island hovering overhead. Thanks to the power of Nintendo DS, all of the lush vistas and perilous paths of Yoshi’s Island span two screens.

Elite Beat Agents The public knows of government agencies like the FBI and CIA, but little is known of this super-secret agency. Code-named â€œElite Beat Agents,â€ these men in black are heroesâ€™ heroes and the coolest group of guys this world has ever known. Of course, according to official records, they do not exist. Their leader, an ex-CIA agent named Commander Kahn, scans the world for cries of help. When he finds one, he dispatches the agents, who assist their targets by performing a song and dance. The hypnotic nature of their rocking revives the targets with â€œGroovyâ€ energy that boosts their willpower and helps them overcome their obstacles.

Sudoku Gridmaster will be released on June 26th and feature over 400 of the popular number puzzles. There are four difficulty settings and plenty of in-game tips to enable the player to become an expert, with all of the puzzles hand-picked by the experts at Nikoli, the original creators of sudoku. As you solve puzzles youâ€™ll win stars that will allow you to unlock new challenges.

Tenchu: Dark Secret is the latest instalment in the stealth action franchise and will be released on August 21st. You play a ninja assassin assigned to protect a princess across over 40 single-player missions, using a mixture of sneaking skills and fighting techniques. Players can also challenge a friend to wireless one-on-one combat and buy, sell and trade items across the global Wi-Fi Connection.

The Full List of Nintendo DS titles announced by Nintendo is included below, with release dates where possible.