Straight from the on-going Square-Enix Pre-E3 press conference, Final Fantasy XIII has just been announced exclusively for Playstation 3. Here’s some info on the game… 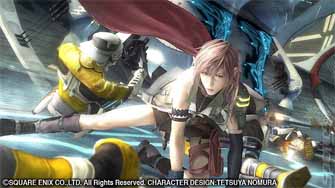 The game was begun by the FFX team for PS2, but the team was then derailed to make last year’s FFVIII PS3 tech demo. They were so happy with the hardware, they decided to then shift development to the new platform. Apparently the game will run on the “White Engine” and will feature the most technologically advanced civilization ever featured in a Final Fantasy. The storyline will center on “those who resist the world.” It will tie in to more Final Fantasy XIII products as Square-Enix really took notice at the success of the Final Fantasy VII: Compilation products and how other products relating to the Final Fantasy VII universe were very successful. There will also be a mobile Final Fantasy XIII related game. 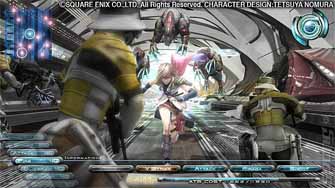 Square Enix had only just officially announced Final Fantasy XIII at its E3 2006 press conference, but that didn’t stop the company from announcing its sequel. Final Fantasy Versus XIII is being created by the team behind Kingdom Hearts 2 and will be an “extreme action game” that serves as the direct sequel to Final Fantasy XIII and will appear on the PS3.