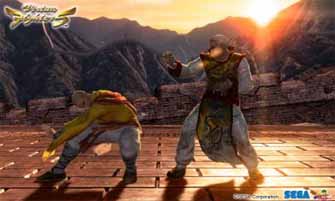 Sega announced Virtua Fighter 5 will be exclusive to the PlayStation 3 when it is released in North America in Spring 2007. The game will feature high-definition graphics & support a 720p resolution. Virtua Fighter 5 will sport more than 15 characters, including many from previous installments. It will also include two new characters…

Eileen and El Blaze of Chinese descent, Eileen “uses a Monkey Kung-Fu fighting style that she learned from her grandfather, a former Kung-Fu master,” according to Sega. As one might gather from the name, El Blaze is a master of lucha libre, the flamboyant style of Mexican wrestling.

Besides introducing two new characters, Sega also released some gameplay details about Virtua Fighter 5. The publisher carefully avoided any mention of an online mode, but did say players could win in-game money for their victories which they could use at an in-game shop. Sega also said that players could pick from several customizable costumes and “attachable items” that “can be placed onto each fighterâ€™s various body parts.” From: GameSpot.