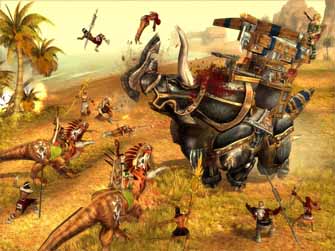 This year Sunflowers will be presenting two new titles at E3: ParaWorld and Anno 1701, the third part of the Anno series which sold till now sold 4.4 million copies. Release dates are ParaWorld by the end of August, and ANNO 1701 in October 2006. Details follow below.

For the first time ever, the fantastic Gameplay featured in ANNO 1701 (the third part of the most successful game series of all time emerging from German-speaking countries) will be presented to the public. In addition to the extremely detailed graphics, which are bound to set new standards for the genre, this unrivalled king of Empire Building Strategy games boasts unrivalled depth and comprehensive innovations.

In terms of content, the third part begins where its two predecessors ended. In the age of exploration and sea trade, the player sets off to discover new islands and establish huge metropolises. The classic ANNO principle is, of course, preserved in this latest version: Increase your influence and treat your people well.

ParaWorld is the result of what is probably the most complex, costly and time-consuming RTS game development effort to date to emerge from the German-language territories. Just before its world-wide release, visitors can explore the nearly-final version.

This 3D Real-time Strategy game takes the player to a prehistoric parallel world populated by exotic tribes and awesome battle dinosaurs. In addition to the inventive storyline and sensational graphics, the â€œArmy Controllerâ€œ is ParaWorldâ€™s innovative highlight. It allows the player to control all units as well as a tribeâ€™s development centrally and comfortably, thus opening new dimensions of clarity and ease of control in the RTS genre.