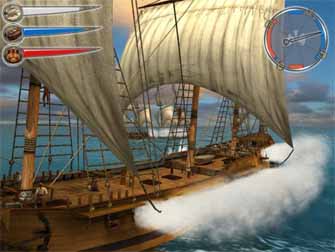 Infernal (World Premiere) Release: end 2006 (Xbox 360, PS3, PC)
â€œInfernalâ€ tells the story of Ryan Lennox, a handsome devil who works undercover for the forces of Hell as a special agent on Earth. The game play centers around the eternal battle between heaven and hell, good and evil…

Youâ€™re a top intelligence agent, but also a devil straight from hell. You use the latest hi-tech gadgets, hack computers, fight hand-to-hand or provide cover fire. And when all this becomes insufficient, use your supernatural infernal powers. Ryan Lennox turns into a ghost, feeds himself with defeated souls and every weapon in his hands becomes truly devilish.

Unique atmosphere, unbelievable graphics, great amount of possibilities combined with simple intuitive steering, and a hero never seen before – this constitutes the essence of â€œInfernalâ€.

The game is based on the story of the novel â€œCaptain Bloodâ€ from Rafael Sabatini: an epic Odyssey about an English surgeon who was framed and condemned to a penal servitude on Barbados. Passing through hard times, he escaped from the tropical plantation hell and become a pirate. Soon the Caribbean was set ablaze by his deeds and exploits. â€œAge of Pirates: Captain Bloodâ€ gives the gamer the extraordinary chance to live the life of one of the most eccentric pirates of all time. Follow the pirate star in an amazing quest for gold, glory and love.

Ancient Wars – Sparta Release: Q3 2006
â€œAncient Wars: Spartaâ€ is based on the history of the ancient ages and their main nations. Spartans, Persians and Egyptians are fighting for influence around Asia Minor, Europe and North Africa. Following historical events, the action takes place with different campaigns for all three races. Sparta represents 3D strategy in real time with the newly developed â€œAncient Wars Engineâ€ (AWE), where the player will have to use each nationâ€™s powers to be superior over other competitors and build up a dominant culture and civilization.

The main emphasis is on large-scale battles and complex tactical maneuvres. Players can strategically equip soldiers with weapons of choice. Warriors can be equipped with weapons and shields, put on horses or chariots and be given special abilities. The player can collect abandoned weapons after battles or import powerful weapons from other cultures to build special units. Fire, Wind etc. will effect the whole environment. Cities can be upgraded and turned to fortresses, workers gather resources to ensure a safe economy. Ancient Wars: Sparta offers RTS fans all their favourite gameplay with a vast variety of new features and innovative options.

Taking the role of reckless fortune-hunter Blaze or redheaded daredevil Beatrice – the player will navigate his sailor through the Caribbean, trade multiple goods, plunder merchant convoys, accomplish quests, build up his fleet, capture and rule colonies and much more.

Following his lucky star he lives a life of high adventure, full of naval battles, bloody fights and treasure hunt, in a world of piracy and sea romance. In addition, the game can be played in 3rd person perspective, exploring your colonies and fighting side by side with your crew of loyal cutthroats and corsairs.