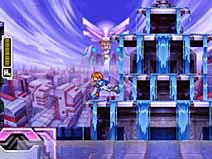 Capcom’s official website for the upcoming Rockman ZX / Megaman ZX for the Nintendo DS has been relaunched. Since it’s all in Japanese, you’ll have to make due with the screenshots showing the gameplay details. But there’s an upcoming movies section as well, so if you’re a fan keep an eye out for that site.

Rockman ZX is set for a Japanese release on July 7th, Megaman ZX however has not yet been announced for a release outside Japan.