Here’s some new info on the latest Castlevania game thanks to Nintendo Powerâ€™s Castlevania: Portrait of Ruin feature. 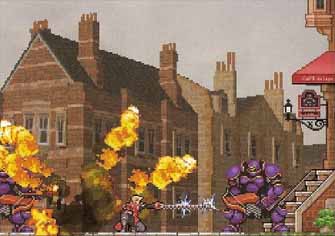 â€œWeâ€™ve been using musical terms for subtitles recently, like Symphony of the night,â€ series producer Iga (yes, just Iga) says. â€œBut when you think of major art forms, the other one that comes to mind is painting. So I thought, why donâ€™t we try something with paintings for this new project?â€ Youâ€™ll find Braunerâ€™s works hanging throughout the castle, but they serve as much more than just elegant decoration. Each one can transport you to a different locale, from the deserts of Egypt to a London inspired city called Mistry Town.

Despite the ocasional outdoor excursion, the majority of the adventure still takes place within the walls of an enourmous castle. Within this structure, each outdoor area serves as a subdungeon of sorts.

The producer plans to include either a co-op mode, or a versus mode similar to the LAN battles in Dawn of Sorrow. Whichever one he goes with, he wants it to play off the dual protagonists. As you collect items, youâ€™ll also be able to set up your own shop and sell acquisitions to other players around the world. So less of the touchscreen actions, more focus on wireless gaming.

Thanks to the classicgaming forum for the scans.