Whoever hands out driver’s licenses in the Mushroom Kingdom is about to be in some serious trouble. In Mario Kart: Super Circuit classic Mario Kart action is back once again, this time in a colorful, lightning-fast racing game that you can take anywhere thanks to the GameBoy Advance. Mario, Luigi, Peach, Toad, Wario, Yoshi and Bowser are all tearing up the track, tossing Koopa Shells and laying banana peels along the way. 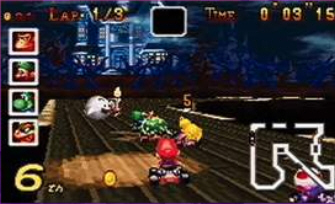 Mario Kart: Super Circuit has you racing against seven Mario-universe opponents in go-karts. On the 20 different racing tracks you’ll find various power-ups to help the bearer or hinder their opponents, as well as coins which increase the player’s top speed. Talking about speed, don’t forget you can get through most corners by drifting by holding the R (right shoulder button) and pressing left or right on the Directional + control pad. Drifting allows you to turn sharply without slowing down, it’s the key to faster lap times. On that subject, press the A button at just the right moment before the light turns green and you’ll start the race with a huge speedboost.

You can unlock tracks (called the Special and Extra Cups) at the speed they were unlocked with. For example, obtaining a Gold trophy in each of the first four Cups at 50cc unlocks the Special Cup at 50cc, but not 100cc or 150cc. Gold trophies on all cups including the Special Cup and collecting 100 coins in a cup in turn unlocks the Extra Cup. Time Trial mode for the Extra Cup is unlocked when the player unlocks 150cc (which counts for all tracks). The Extra Cup includes all the tracks from Super Mario Kart.

The eight racers fall into three different classes. Each one has different characteristics and performs differently on each track. Try them all out to see which racer suits you best.

* The lightweight class includes Yoshi, Peach & Toad and has excellent acceleration, but low top speeds. Are not slowed much by dirt, but easily knocked aside by heavier karts.

* The middleweight class includes Mario & Luigi and has great steering. It’s the balanced alternative to the lightweight and heavyweight karts

* The heavyweight class includes Bowser, Donkey Kong & Wario and has a very high top speed, but acceleration and steering require careful attention. Bumps lightweight karts out of the way, but suffers from tremendous slowdown off-track. Note that there’s nobody faster than Bowser and that Donkey Kong has better steering than Wario.

* Mario GP: Eight racers compete for points. (suitable for 1-2 players) This mode features eight racers that compete for three laps on all four tracks in a cup as they try to earn the most points and win the grand prix. Each Cup may be approached at a 50cc, 100cc, or 150cc speed. If you place fifth or lower in any race, you lose a life and must restart. You can also choose to restart a race at any time, at the cost of one of your three lives.

* Versus: Compete against your friends for first place. No CPU players. (suitable for 2-4 players)

* Battle: Battle on four stages from Super Mario Kart and try to pop your opponent’s balloons. Each player gets three balloons on their go-kart to defend. (suitable for 2-4 players) Balloons pop when you drive over a banana, get hit by a shell, collide with an invulnerable opponent or drive off the edge of the track. The last player standing wins. In 3- and 4-player matches, if you lose all three balloons you’ll transform into a Bob-omb that’s invisible on the map and can try to destroy another go-kart as revenge like in Mario Kart 64.

* Time Trial: Race alone to get the best time. (suitable for 1 player) This mode gives you a chance to see just how quickly you can complete three laps around a track with nothing more than your skills and three Mushrooms to give you three quick bursts of speed. A lap-time and total-time record are set for each, for a challenge, and the player’s best lap time and total time recorded. It also gives you the choice to use ghost data from previous attempts while racing or not.

* Quick Run: Race for place against seven other racers. (suitable for 1 player) It’s the perfect mode to practice individual tracks for the Mario GP cup races. When choosing this mode, press the Select button on the Mode Selection Screen to change game settings. Use the Directional + Control Pad to adjust settings like the number of laps, as well as turning items and coins on or off.

What are the main features in Mario Kart: Super Circuit?

* The gang’s all here! — Mario, Donkey Kong, Princess Peach, and five others are ready to roll, each with unique racing skills.

* All-new tracks! — Master each of the 20 courses to unlock hidden bonus tracks. There are more than 40 tracks total.

* Power up! — Wield all of the best items from Super Mario Kart and Mario Kart 64, including bananas, red shells, and the fearsome spiked shell.

As a conclusion let’s rate the game on its fun-basis.

FUN FACTOR – 9.0
For action-packed racing with great graphics, addictive arcade gameplay, and incredible replay value, Mario Kart: Super Circuit takes home the checkered flag. Burn rubber in the intense Grand Prix, race your pals for item-induced-luck chaotic gameplay, race your own ghost to perfect your skills, or shift gears for the mayhem of battle mode. It’s all a huge amount of fun; for the first time the power’s in the palm of your hand and it feels GREAT!

Graphics – 9.5
The Mode-7 pseudo 3D graphics in this GameBoy Advance incarnation of the Mario Kart series run at 30 frames per second, so it doesn’t play as fluid as the SNES game Super Mario Kart, but still looks similar and plays smooth on the small portable screen. Quite a feat for the GameBoy Advance hardware. The track layouts are fantastic and character designs are cartoony with everything being very colorful.

Audio – 8.0
The sound effects are mainly weapons firing (from the familiar bananas, star, lighting strikes, etc.), engine noises, and each character has their own one-liners that are used to great effect as you get hit by a power-up weapon or use an item. The digitized soundtrack delivers a cheerful happy score through the GBA’s speaker, but sounds much better with earphones.

Ingenuity – 9.0
Mario Kart: Super Circuit plays every bit as well as its predecessors with a good weapons balance during races across superbly designed tracks. All you’ll need to get used to is the smaller button configuration of the GameBoy Advance, but that doesn’t take too long, so you’ll be racing to the finish line like a pro in no-time.

Replay Value – 9.0
Mario Kart: Super Circuit puts your driving skills to the test on 40 tracks you can play on 50cc, 100cc and 150cc, each track’s littered with wild weapons and obstacles. The Cups and Battle setups have a great variety in courses, characters and modes with many favorites from classic Mario Kart games returning. As with any Mario Kart game, single player is great, but the game always becomes more fun and competitive in multiplayer. Feel like making some friends eat your dust? No problem. Four players can compete in Mario Kart: Super Circuit using only one Game Pak using GBA Link Cables, although all players will be different colored Yoshis and have only one engine class available. If each player has a copy of the game, bonus features like ghost data trading (10 courses maximum) and more modes of play become available.