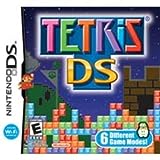 Tetris DS is Tetris like you’ve never seen before! With six highly addictive modes of play, with single-player challenges and multiplayer matches.

Each of the six modes of play features a theme based on a classic Nintendo game. It makes the most of the DS stylus and dual screens, and allows a Nintendo Wi-Fi Connection to compete in two- or four-player battles. 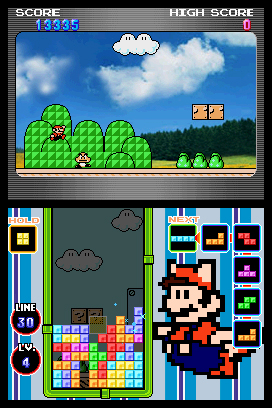 The long blue bar. The yellow block. And those darn zigzag things whose images stay on your brain. These familiar Tetris shapes started a generation of video game fans back in 1989 when the game was bundled with the original Nintendo Game Boy. Now Nintendo is putting a new spin on the classic with Tetris DS, which incorporates the use of Nintendo Wi-Fi Connection, Nintendo’s wireless gaming service. Hard-core and casual gamers alike became obsessed with the original. Tetris DS builds on that emotional attachment by combining the original game’s falling block puzzles with new types of game play like Touch Mode that could only be possible on Nintendo DS as you move blocks around the screen using the Nintendo DS stylus and touch screen. Every gamer, whether competitive or casual, will find a way to reconnect with one of the most popular puzzle games in history.

Players can hone their construction skills through any one of six different modes contained in Tetris DS, each featuring a theme based on classic Nintendo games such as Super Mario Bros., The Legend of Zelda, Metroid, Donkey Kong, Ice Climber, Excitebike, Duck Hunt and more. As well as Nintendo theme based modes, the modes also contain remixed classic Nintendo music, guaranteed to bring sweet music to any player’s ears.

Traditional falling blocks and line clearing strategy remain essential, however the Nintendo DS’s touch screen opens up a whole new level of interactivity for the player as the screen is used to twist and turn the blocks. Tetris DS’s Standard mode has variations to the basic Tetris formula. The player is allowed to hold a Tetris block by pressing L or R. This allows the player to insert the Tetrimino (falling block) currently on the screen into a small box for future use, and will swap places with a piece after the button is pressed again or when it’s activated with the X button. Also, a Tetrimino will not lock into place until the player does not move or rotate it for a set amount of time. This means that the player can keep the piece in play indefinitely by rotating it consistently, like in The Next Tetris game.

* The game’s Standard Mode is a faithful recreation of the much-loved Tetris. However, as the player completes lines, the computer plays through the original Super Mario Bros on the top screen. Move and rotate the Tetriminos and fit them into horizontal lines to clear them away. Don’t let the blocks stack up to the top or it’s game over.
— Marathon: Do you have what it takes to clear 200 lines? That’s the one and only goal of this challenging mode. You will advance one level every time you clear 10 lines.
— Endless: This mode can be unlocked after finishing Marathon mode. If the player reaches beyond level 20, the cycle of backdrops repeats as you improve your highscore. The highest visible score in Endless mode is 99,999,999 and the highest visible number of lines completed is 999.
— Line Clear: Choose the level and height, then battle for the most points by clearing the number of specified lines. The higher the level and height, the harder it will be. Harder challenges earn you more points.
— VS CPU: Set the CPU difficulty level and get ready to battle. Clear 2 or more lines at once to dump new blocks on your opponent’s screen. Fill your opponent’s screen to the top first to win. Clear multiple lines after your opponent attacks to prevent new blocks from dropping on your. New blocks increase automatically over time.

* Push Mode adds a Donkey Kong themed tug-of war spin to Tetris, where players race to ‘push’ their opponents off the screen by completing lines. Your area is on the top screen while your opponent’s area is on the touch screen. Clear 2 or more lines at once to push the matrix towards your opponent. Keep pushing your opponent all the way to the bottom to win. If you get pushed up to the top, you lose.

* Touch Mode makes use of the Nintendo DS touch-screen, with a distinct Balloon Trip feel as players use the stylus to drag towers of blocks around the touch screen to make lines. Try moving them left and right to make them fall into empty spaces. Tap a block twice to rotate it. Complete a line to clear it away and make blocks above it fall down.
— Tower: Blocks are stacked to the sky! Move blocks with your stylus to form horizontal lines and clear them away. Clear the blocks away until the cage of balloons touches the ground to win. If you get stuck and can’t make any more moves, you’ll have to tap Give Up. On levels 4 and 5, you can’t rotate the blocks.
— Touch Puzzle: Look at the directions on the top screen and try to solve the puzzle using only the blocks you’ve got. In this mode, you can’t rotate any of the blocks. If you make a wrong move and get stuck, you’ll have to tap Retry to start the puzzle over.

* The Yoshi themed Puzzle Mode challenges players to clear 200 pre-programmed puzzles with a selection of blocks. There is only one correct combination so the challenge is definitely a head-scratcher! Choose the puzzle you want to solve, then your goal will be to clear the screen with just the Tetriminos that are provided. To play, choose a block and then the direction you want it to drop. The Tetrimino will then drop automatically.

* Mission Mode gives players a series of Zelda themed quests to complete before your life runs out. Your current mission objective will be displayed on a scroll on the top screen. Study the example on the left and then scramble to complete your mission before you run out of hearts. As soon as you complete one mission, you’ll be given another one.
— Marathon: Complete as many missions as you can and set a new highscore. Each mission has a set time limit. If you don’t finish your mission before time expires, new blocks will appear on your screen. Don’t let blocks build up to the top or your game is over.
— Time Trial: Complete a set number of missions as fast as you can to set a fastest time. Watch out because each mission is harder than the last.

* Catch Mode is a wacky space based game with a Metroid theme. Players must control a flying block and catch other blocks to make 4×4 grids. To be more exact, you move and rotate the core on the bottom screen and fuse it to falling Tetriminos. Then with those you create a 4×4 set of blocks to make the core explode within 10 seconds and earn a load of points. You can also press the X button to manually detonate the core. Don’t run out of energy or let your blocks stack to the top or bottom, or your game will be over.

Outside of single player, there’s multiplayer for players who would rather compete against friends. Using the local wireless connection, this allows up to ten people to battle with only one copy of the game on Standard and Push modes, meaning multiplayer does not require multiple game cards thanks to single-card download play. If each player has their own cartridge of the game, then Mission mode also becomes available. In the Standard mode, much like Tetris Attack, you’ll find helpful effects that can put your opponents at a disadvantage, (think sending them items like block-changing bananas and lighting bolts that freeze up your block rotation), so you can get ahead and win.

What are the main features in Tetris DS?
* The traditional Tetriminos (falling blocks) and line-clearing strategy remain the same, but the touch screen adds new interactivity.
* Innovative use of DS stylus and dual screens.
* Six modes classic and all-new modes like Push Mode, Catch Mode, Puzzle Mode, Mission Mode, etc.
* Incredible artwork inspired by favorite Nintendo games like Super Mario Bros. and The Legend of Zelda.
* 10 DS players can battle with only one Tetris DS card.
* Battle on the Nintendo Wi-Fi Connection.

As a conclusion let’s rate Tetris DS on its fun-basis.

FUN FACTOR – 9.0
Prepare to be hooked on one of the world’s most addictive puzzle games ever! Six infinitely replayable modes of play, a nostalgic retro gaming theme throughout, fantastic one-cartridge game sharing for up to 10 people and a few modes in the smooth online multiplayer too! It’s one of the best puzzlers on the DS, since there’s a lot of single player and multiplayer fun to be had for puzzle fans.

Graphics – 7.5
Each of the six modes of play features a different theme based on a classic Nintendo game, such as Super Mario Bros., The Legend of Zelda or Metroid. The game looks like classic Tetris with new colorful yet nostalgic visuals.

Audio – 7.5
There are remixes of classic 8-bit Nintendo and Tetris tunes. A very light-hearted catchy soundtrack throughout the game.

Ingenuity – 9.5
The traditional Tetriminos (falling blocks) and line-clearing strategy remain the staples of the game, but the touch screen adds a new element of interactivity. Like every incarnation of Tetris, the fast reflexes-testing gameplay may have evolved, but it’s still good old super addictive Tetris.

Replay Value – 9.0
The single player game has unlockables like Endless mode, which allows for “endless” replay value like the other addictive modes. Once you’re done with that, the multiplayer part only needs one cartridge to start a game with up to nine friends in local wireless mode! Multiplayer features head-to-head action between two players, or massive wireless battles between 10 DS users, even if only one player has a game card. Players also can log onto Nintendo Wi-Fi Connection to compete, and while online gameplay is flawless, the online matches are limited to Standard Mode with two-player or four-player with items and Push Mode for two-players. But it’s still good fun if you can’t find anyone to play against locally. Tetris DS even includes a point-based rating system based on players’ battle results. Opponents can see one another’s ratings, which indicates their skill levels, and will definitely get the competition going. There may not be a classic Tetris mode without all the DS enhancements, but make no mistake, Tetris DS’s six modes can give you months of fun.