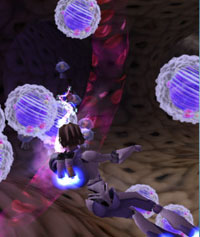 HopeLab has announced Re-Mission. It’s the first PC game scientifically shown to improve health-related outcomes for young people with cancer. The game is available free of charge to young adults with cancer concurrent with the release of positive results from the Re-Mission Outcomes Study. To top this off, looking at the game’s trailer, it actually looks like fun!

Data from the study showed statistically significant improvements in cancer-related self-efficacy, social quality of life, cancer-specific knowledge, and adherence to prescribed medication regimens in patients who played Re-Mission. The game started development in 2004 and is a collabrative effort of young people with cancer, researchers, medical experts and game developers.

“Re-Mission works. It gives teens and young adults a sense of power and control over their cancer,” said Pat Christen, president of HopeLab. “Research on Re-Mission was conducted in much the same way research into a new drug is conducted, with rigorous testing based on scientific principles. Our study findings clearly demonstrate the effectiveness of the game in improving health-related outcomes for these kids. It’s great news.”

The game’s main character Roxxi, is a gutsy, fully-armed Nanobot who seeks out and destroys cancer cells throughout the human body, battling cancer and its life-threatening effects. Through 20 different levels of game play, Re-Mission illustrates what occurs inside the bodies of young cancer patients and how they can most effectively fight their disease.

Re-Mission is now available free of charge to teens and young people living with cancer at www.re-mission.net. The site is designed to allow teens with cancer to connect with each other and share information. The game, including English, French and Spanish versions, will be available May first to all others for a suggested donation of US$20.