Sega SuperStars for EyeToy, developed by Sega’s Sonic Team studio, leverages the camera control-method featured in EyeToy to bring a new level of interactivity to the company’s core brands such as Sonic the Hedgehog, Samba de Amigo, House of the Dead, Virtua Fighter and more. 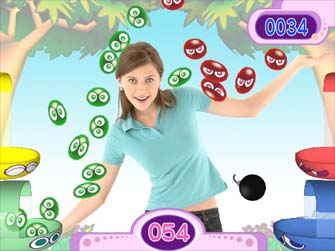 A compilation of 12 different mini-games and one of the last titles developed by Sonic Team before it was reabsorbed back into Sega. It’s an ingenious idea: take various snippets from hit Sega games, mix in the EyeToy and add people. The result, Sega Superstars, is an excellent party game that all the family can enjoy.

Each mini-game drawing inspiration from a Sega hit. Thus, the Sonic section demands a balancing act as you use your body to guide gaming’s most infamous hedgehog on his latest quest for coins racing through Sonic’s Super Speed Tube. The Virtua Striker segment is more simplistic, you simply head a football and try and hit various targets, whilst Virtua Fighter is great as you punch and kick your opponent (like Akira) into submission. Space Channel 5 has you mimicking dance movements meanwhile, and Samba de Amigo is outstanding fun, as your arms mimic maracas. The highlight though is born from one of the firm’s lower profile franchises. Puyo Pop is a work of some genius, as you use your body to direct blobs into the right colour receptacle. You’ll find yourself contorting into distinctly unhealthy shapes as you try to beat the top score, and having similarly unhealthy amounts of fun as you do so. In a pack of twelve, it’s unsurprising that not everything hits, and we can’t see the House of the Dead nor Billy Hatcher segments being used too often. But nonetheless Sega Superstars delivers buckets of entertainment, and then some. Best played in numbers, but no slouch with just one, it’s arguably the best EyeToy game to date.

So what are the main features in Sega SuperStars?

* Collects over a dozen mini-games designed to be played with the EyeToy.

* Requires EyeToy Camera to translate your movements into on-screen actions.

The 12 different games to play in Sega Superstars’ main mode are:

* Sonic the Hedgehog – It’s a supersonic race for rings & emeralds. As Sonic runs down a round tunnel, he follows the position of the players hand. Using this method, the aim of the game is to gather rings and Chaos Emeralds in order to obtain the highest score at the end of the game.

* Samba de Amigo – Shake your thang to the mambo beat. Players choose a song, and then must hit 6 different targets around the screen as the ‘beat balls’ reach them in time with the music. Posing with hands over 2 of the targets, or holding one position until a trail of beat balls is complete, may also be required from the player.

* ChuChu Rocket! – It’s cat + mouse Sega style. Movement over a certain target on the screen will causes a bridge to raise, which the chu-chus then follow to the goal. The bridge also must be dropped at certain moments to prevent KapuKapus from destroying the score.

* Puyo Pop Fever – Flick those Puyo beans into the pot. Differently colored puyos will fall from the top of the screen, and the player’s body must be positioned to guide them into the corresponding pots and allow bombs to topple off the bottom of the screen.

* Crazy Taxi – Drive yourself crazy hailing the craziest taxi. Large movements and loud sounds must be undertaken to stop the Crazy Taxi and complete the level.

* Super Monkey Ball – Go bananas with AiAi. The player must move their arms into different positions in order to guide the monkey ball around obstacles and towards the goal, picking up as may bananas as possible along the way.

* NiGHTS Into Dreams – Guide NiGHTS to the Ldeya Palace. NiGHTS must be controlled and navigated through rings, collecting chips along the way, by raising your arms into a ‘flying’ position and adjusting them along the way.

* The House of the Dead – Fight your way through zombies. A multitude of different zombies must be attacked and defeated by hitting them. Innocent people who occasionally appear must also be avoided.

* Virtua Striker – You pass, you shoot, you score! As footballs drop from the top of the screen, the aim is to head them into differently colored and scored balloons on the opposite side of the screen in order to obtain the highest score.

* Virtua Fighter – Come on, give it your best shot. Standing to one side, players kick and punch the corresponding attack prompts on the screen in order to defeat the opponent. Block and counter prompts also appear, and must be reacted to accordingly.

* Space Channel 5 – Dance with Ulala to the alien beat. Different dance move combination must be remembered when shown by the Morolians, and then repeated in time to the music by hitting six different buttons on the screen.

* Billy Hatcher and the Giant Egg – Hard-boiled, egg-rolling mayhem. By waving their hands over two different targets, players must move Billy and the egg around, and crush enemies and collect fruits along the way to the goal.

* In Sonic the Hedgehog, if you successfully complete all three difficulties with Sonic, you will unlock Shadow’s story which allows you to control Shadow instead of Sonic, although this story is much harder.

* In Puyo Pop Fever, if you successfully complete all three levels, you unlock a mode called “Free Mode” that allows players to simply play around with puyos and experiment with moving them around.

* In NiGHTS into Dreams, successfully completing all three levels opens up a new night-time area (Twin Seeds) with harder levels and different scenery.

* Completing all three levels on both Samba De Amigo and Chu Chu Rocket, you unlock an extra-hard difficulty setting.

* Also available is a variation of the Tiny Chao Garden from different Sonic games. Here, a chao can be hatched and petted via different movements. It is also possible to interact with some scenery (Shaking trees for fruit) and purchase items for the Chao using rings collected in the main game mode.

FUN FACTOR – 8.0
Sega SuperStars is a party game for family and friends, it capitalizes on the popularity of Sony’s EyeToy mini-game collections by throwing in Sega mascots for mini-games. A nice, even creative, collection of games that combine both generic controlled games (Sonic the Hedgehog, Super Monkey Ball, Crazy Taxi) and very fun games (Puyo Pop Fever, The House of the Dead, Virtua Fighter). Too bad there weren’t more great games included, but at its budget price it’s a good deal. The result is still a fun, but not addictive, party game that should last you a few evenings and in groups it’s definitely good for lots of laughs! Like I made clear before, with its easy accessibility this is the best EyeToy Camera-controlled game you can get your hands on. Pun not intended… ok maybe it was.

Graphics – 7.0
All the game designs are very simple, as a result the graphics match that fun-but-basic look. Nice and colorful though.

Audio – 7.0
Loud arcade-like sound effects and cheerful music throughout the game. It fits well with the game’s theme.

Ingenuity – 8.5
The most important things to keep in mind with EyeToy games is that they require a well-lighted area to fully detect the player’s body, and not just that, you need to look at the background that’s being played against so your cloths colors don’t accidentally blend in with the background. Both those are important notes, because otherwise the game will have trouble picking up your body movements. Once the EyeToy Camera picks up your movements, it’s really fun as the game does a decent job translating your movements into on-screen action. Some games are stinkers (yeah, I’m looking at you, Sonic) but the variety of mini-games will give plenty of fun to those of you willing to twist their body in odd positions during a game of Puyo Pop Fever and shaking your hands like crazy in Samba de Amigo.

Replay Value – 7.0
Each of these mini-games has only three levels of difficulty. Since only one player can play at the same time and most mini-games will only take you a few tries to get through, the replay value comes from the highscore boards on each mini-game where number one’s photo will be displayed to get some competition going.