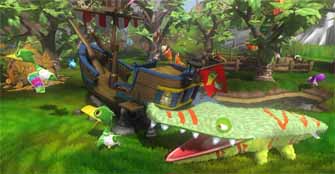 Rare just announced their latest game called Viva PiÃ±ata for Microsoft’s Xbox 360. The game revolves around 62 breeds of living paper candy-filled piÃ±ata animals that will be featured this fall in a Saturday morning TV/3-D/CG 4Kids TV show on FOX, followed up by an Xbox 360 game debuting before Christmas worldwide.

There will be co-operative and competitive play online. The game will have more Xbox Live functionality in the form of object transfer, which will let you send piÃ±atas from your game to a friend or upload and download them from the Marketplace. I like the game’s art style, it’s cute, bright yet pretty without too many graphical effects, let’s see how it turns out.

Here’s the official website with more info as well as a TV show movie. Watch the game’s trailer by clicking on the play button below.