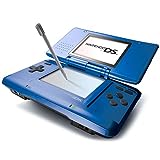 We here at Video Games Blogger love Nintendo, and subsequently, we love what Nintendo has done with it’s magnificent DS. From the touch-screen controls to the duel screen action, from the microphone to wireless internet play over the NWC (Nintendo Wi-Fi Connection), the DS has blazed a trial with it’s unique features and proven that gamers actually DO want innovation and new perspectives with their video games. And gamers have shown their interest time and again with brisk sales of the DS and many hit games, from Mario Kart DS to Animal Crossing DS to Kirby: Canvas Curse, Nintendogs, Castlevania: Dawn of Sorrow, Trama Center and lots more, the DS shows no signs of slowing and it’s unique line-up is second to none.

And that fact was driven home with the newest DS release, the brand-new Nintendo DS Lite, which debuted in Japan on March first and quickly sold out, with hundreds of gamers, of various ages from old to young, standing in lines outside stores in the morning air, waiting in anticipation to get their hands on the upgraded system (which sports a smaller, lighter, sleeker design with less weight, brighter screens with 4 levels of adjustment and smaller cosmetic changes like new color schemes, a new position for the mic and a cover for the GBA port).

As usual, Yodobashi Camera had an extremely long line, prelaunch. 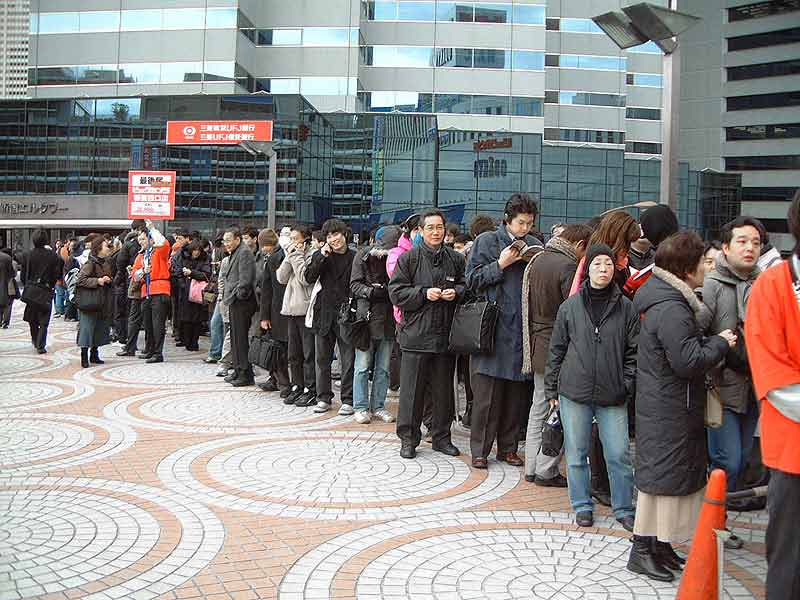 More than 60 customers had started to line up by midnight, and the line nearly doubled by 8:30 a.m., when the store opened its doors.

In 2004, the original DS only had about 40 customers waiting on line at the launching hour. And back then, the line dissipated in about 10 minutes, with consumers able to pick up the handheld at lunchtime or even a day later without a reservation.

This time, it was different. Employees tending the lines for the DS Lite were seen with “Sold Out” signs posted before the stores opened. Many places were completely sold out by the time the store opened, and the chances of getting a system if you weren’t one of the lucky gamers standing in line was next to none. 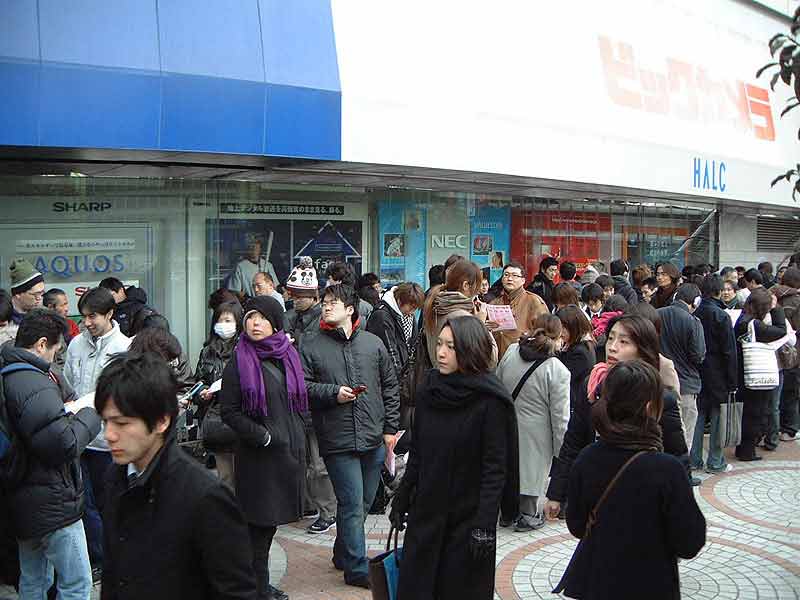 Yodobashi was originally scheduled to open 30 minutes earlier than its usual 9:30 a.m., but given the long line of customers, the store moved its schedule up an hour earlier. The line wasn’t as bad as it was for Sony’s PSP, but it still extended to across the street and over the block, curving at the corner and still continuing.

Similar crowds assembled at other stores across the city as well. The Shinjuku Bic Camera had an even larger crowd than Yodobashi, with about 300 people waiting in line. Its lines were so long that they were separated into two sections, with each snaking into three rows.

An even longer line was said to have formed at Akihabara’s Yodobashi Camera, which is rapidly becoming one of the favorite locations for gamers to buy their wares. 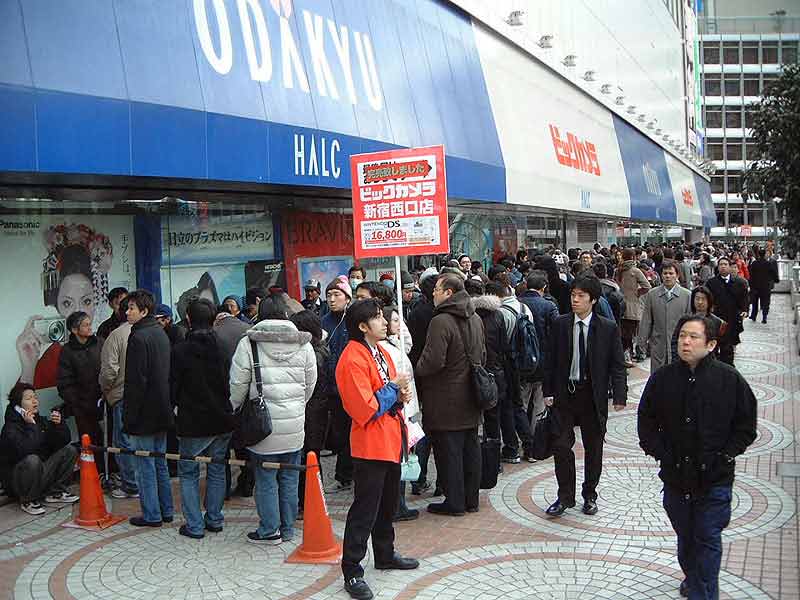 Probably what will stand out most about this launch is that Nintendo’s aggressive campaign to target older and non-gamers/non-hardcore gamers, seems to have worked, as is evidence by the diversity of people in the lines, from elderly couples to females of varying ages, to Japanese business men, Nintendo’s campaign seems to have worked, thanks to the popularity of Nintendo’s “Touch Generation” games; games designed to target new audiences, including females and elderly people, through the likes of Nintendogs and their “Brain Age” series of learning tools and educational games, a couple of which have already sold in excess of 1 million copies, and Nintendo has many more “Touch Generation” styles games on the way, as do other companies, which is quickly turning the DS into more than just a game machine.

A recent Famitsu (Japan’s most respected gaming magazine) survey also showed how far interest in the DS has grown, since the announcement of a web-browser and a TV Tuner for the DS, which is quickly giving it features that were originally only available with Sony’s rival PSP handheld. 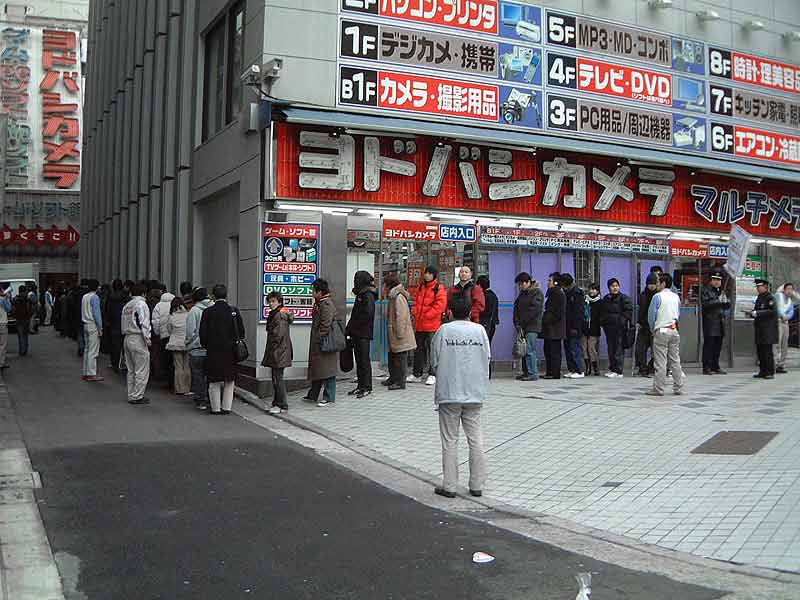 When asked about the DS’s Web browser, 245 surveyed gamers answered that they look forward to using it, doubling the 121 that had no interest. Among the reasons given by interested users were the use of the two screens for browsing (216 votes), convenient controls with the stylus (180 votes), and the handwriting-recognition software when browsing (155 votes). On the other hand, a significant number of users had no idea the DS’s web browser will cost money (3,800 yen/$33–Sony’s PSP comes with one for free).

When asked about the 1seg digital broadcast TV tuner, 38.2 percent of the surveyed gamers said they are looking forward to the TV tuner, while only 9.8 percent said they have no interest. A little over half (52 percent) still weren’t sure about it. The 1seg broadcast service is still relatively new, with the general public mostly unaware of its capabilities.

For its final question, Famitsu asked gamers who don’t own a DS whether they’re now interested in picking one upon learning of the handheld’s new functions. 58.1 percent said yes, 31.1 percent said they’re still thinking, and 10.8 percent said no. 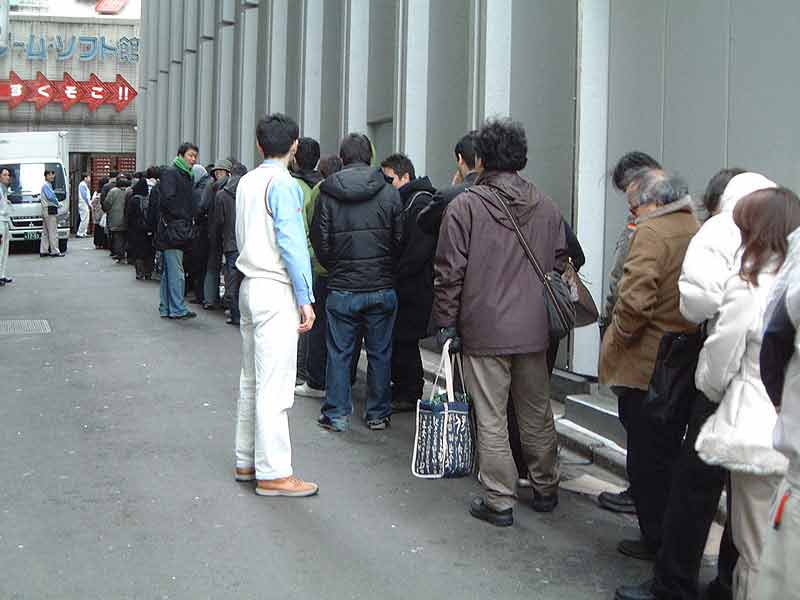 And the DS madness will likely only continue throughout the week ahead as Nintendo gets set to release two more DS Lite colors and a second shipment of the system on March 11, the colors being Ice Blue and Enamel Navy.

Nintendo has yet to announce a US or European release date for the DS Lite, but some people are pointing to the May 7th release of Nintendo’s hugely anticipated new Mario game, the first traditional side-scrolling new Mario game in over 5 years, entitled New Super Mario Bros., as the best time for Nintendo to release the DS Lite, day-and-date with the release of the New Mario Bros. Which sounds like a very good strategy to me, I know I’d certainly consider buying the new system along with the new game, even though I already have a regular DS.

We’ll keep you posted on any new developments regarding a US release. Stay tuned.