An evil planet named Meteo is sending storms of world-ending meteors across the galaxy, and only your puzzle skills can stop them. As blocks called Meteos drop down on the lower screen, you must use the DS’s stylus to match up blocks of the same color.

Is this Lumines for the DS? Or is it something new entirely? Find out below. 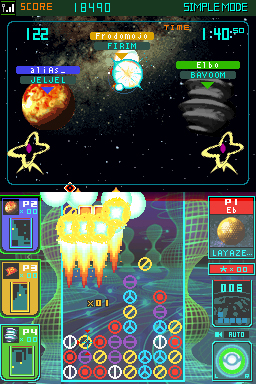 There’s only one means of saving the planet. Send the falling meteors back into space with the power of the Nintendo DS — use the touch pen to move blocks around the play field, as lining up three or more of the same color blocks either horizontally or vertically will group the blocks together into a clump and go flying back into space (above the bottom DS screen) to help stop the onslaught of debris. You can move blocks up and down in a stack using the stylus, but there’s also the option to use the Directional control pad and A button.

But there are multiple tactics to improve your clean-up speed. To lift a large amount of blocks, additional rows of blocks must be formed in a quick succession (secondary ignition). Then there’s a step jump, which happens when an ignited pile of blocks falls back down and during that causes another set of blocks to ignite, the pile will boost back up again, wider than before. By doing a speeder you hold down the L or R shoulder button to increase the blocks falling speed.

Like Tetris, if (unignited) columns of blocks fill up the bottom DS screen it’s game over. During gameplay all unignited Meteos that are launched are accumulated in the player’s profile and can be spent. This process is called “Fusion” and it unlocks: planets, sound tracks, power-ups, and “Time” and “Soul” rare metals, which themselves are used as ingredients in further Fusions. The game features 32 planets to unlock, each planet / level has its own unique size, gravity, and blocks.

* Star Trip — The deep-space warship called the Metamo Ark travels among the planets and uses the characteristics of each planet to do battle. By defeating the final planet, planet Meteo, you can bear witness to the various ends of the universe. The Metamo Ark is the last hope of the universe, a ship that can exactly copy the abilities of its opponents. It seals off the planets in its path to face off against the main culprit: planet Meteo.

* Time War — In this mode you compete for a highscore within a predetermined field. There are two rule sets: Time War (highest score wins) and Meteo War (most Meteos launched wins).

* Deluge — This thrilling mode ends as soon as you experience a planet nova. Play for both score and time.

* Tutor — Receive a quick tutorial on how to play Meteos. Study both the top and bottom screens.

Outside of single player, there’s multiplayer for players who would rather compete against friends. Use the local wireless connection. This allows up to four people to battle with only one copy of the game on four planets, meaning multiplayer does not require multiple game cards thanks to single-card download play. If each player has their own cartridge of the game, then versus allows you to play on all 32 planets (if they are unlocked). In this mode, like Tetris Attack, you’ll find helpful effects that can put your opponent at a disadvantage (think smoke screen), so you can get ahead and win.

What are the main features in Meteos?

* Defend more than 30 planets, each with its own alien race, theme music, block style and gravitational laws.

* Link wirelessly with up to three friends and have a war of the worlds as players select which planet to launch their Meteos toward. Team up, customize items or establish time or stock limits – players can play however they like.

* Using DS Download Play, players can take on up to three friends with only one game card.

In conclusion: If you’re already familiar with the basic gameplay in games like Lumines and Tetris Attack, then you’ll feel right at home with this puzzle gem. The touch screen gameplay really does give it a fun and easy new way to control Meteos, eventhough you don’t have to use the stylus. Now let’s rate this puzzler on its fun-basis.

FUN FACTOR – 8.5
Meteos is produced by Rez and Lumines creator Tetsuya Mizuguchi and is designed by Kirby and Super Smash Bros. creator Masahiro Sakurai of Nintendo’s HAL Laboratories. The game is a curious blend of block-dropping puzzle-action with other gameplay elements with the goal to launch all of your blocks back into orbit. When a concept is simple as simple as this, the result like with most Q Entertainment puzzle games is a SUPER addictive game. It’ll be a lot of fun for the puzzlers amongst you.

Graphics – 7.0
The graphics are very simple in design, but make up for it with a different style for each of the 32 alien planets.

Audio – 8.0
The bombastic-fantastic music make the game’s audio a welcome experience on top of the fast-paced gameplay. The further you progress in the game, the more you start realizing how much the music drives you. The off chance you hate the music (hey to each their own) you can mute it in the options menu. It’s got some solid and funny sound effects too.

Ingenuity – 8.0
While it’s easy to compare Meteos to other puzzle games, it’s got unique “shooting meteors” concept of its own that’s easy to pick up, thanks to it fully using the DS touch screen controls, but relies heavily on speed and reflexes. As long as you don’t cheat, by randomly scribbling on the touch screen when you’re in a bind, you’ll find an easily controlled and very addictive gameplay experience in this DS cartridge.

Replay Value – 8.0
The single player game has lots of unlockables like planets, music and power-ups to gain. Once you’re done with that, the multiplayer part only needs one cartridge to start a game with up to three friends in local wireless mode. Definitely worth your time and money if you enjoy addictive puzzle games that are good for both short and long play sessions.